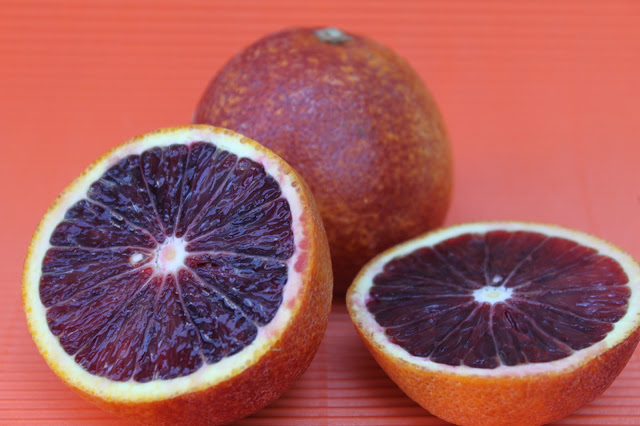 This is an extremely easy dessert. It is made in no time but it is still entirely homemade. It is made from yogurt, sweetened condensed milk, and table (single) cream. Then the cream is baked in a low-temperature oven for a short time. I called it yogurt cream because the delicately sour taste of yogurt is detectable even after baking.

The cream is served with fruits in their own sauce. I used blood oranges which are in season right now, but any other fruits such as pomegranate or berries can also be used. I pureed some fruits with a bit of sugar and used the rest in pieces to make a nice finish. If you wish to make this cream even more satisfying, serve it with your favorite biscuits. 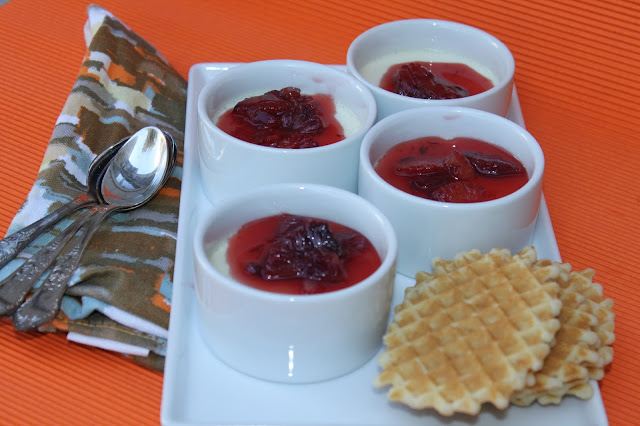 Preparation:
1. Pour both milk and yogurt in a medium bowl and mix well with a whisker.
2. Divide mixture between 8 small ramekins and place them on the baking form.
3. Set oven temperature to 200F and without preheating, place the form in the oven. 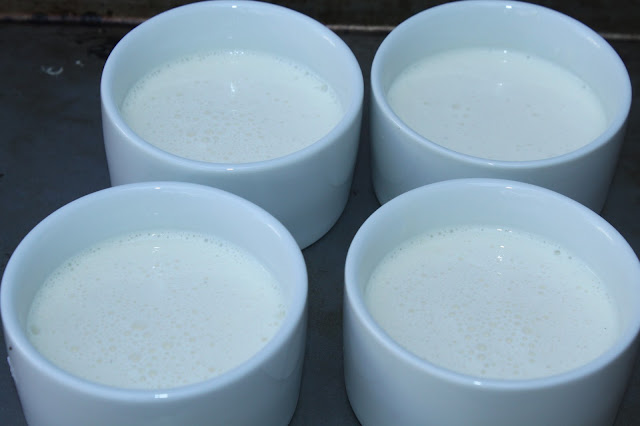 4. Bake for about 15 minutes until the cream is set but not too firm.
5. Remove from the oven and cool down.
6. Cut out segments of oranges from the membrane, mix with sugar and cook until sugar dissolves. 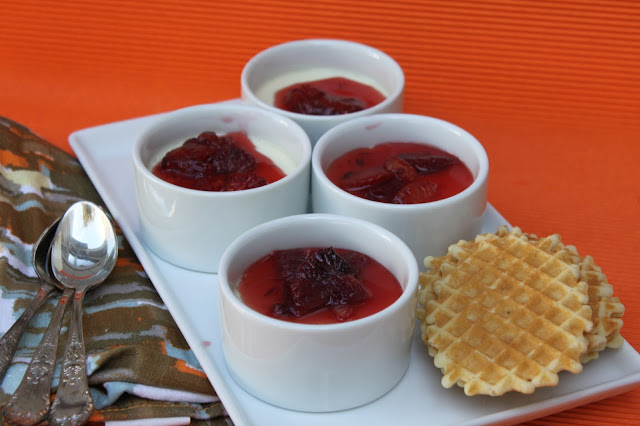 If you use berries puree half of them with sugar and heat until sugar melts. Add rest of the fruits and cool.

7. Serve cream portions with fruits on top and accompanied by cookies, if you wish. 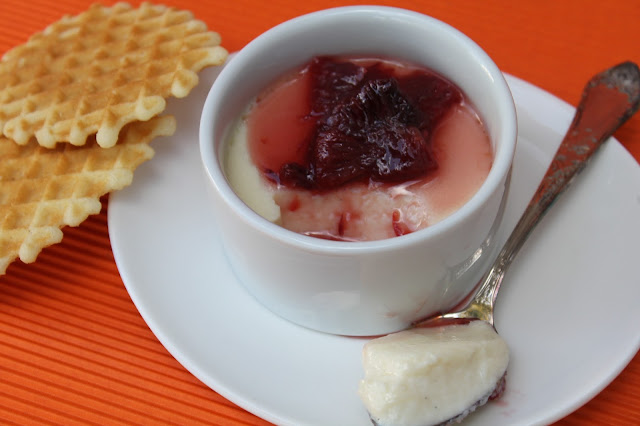 Posted by Pots and Frills at 4:40 PM No comments: 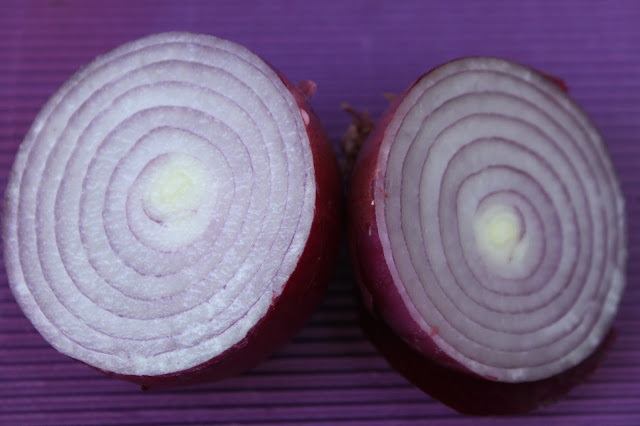 This onion tart has become popular at my home and also quite appreciated when I serve it to my guests so I would like to save this recipe here. The tart is so nice thanks to that perfect dough it is made with. It is flaky as puff pastry but ;not so dry. It is also slightly short and sandy. Because the dough is baked on top of the tart it is not get the moisture from the layer of vegetables and remains crunchy once baked.

This particular tart with red onion is a kind of cold weather dish, but it can be made with a different vegetable depending on season turning it into a spring or summer version. It also can be made with fruits as a dessert. There are no eggs or cream added to the filling just a little bit of goat cheese, and an apple which adds the extra sourness to the tart. 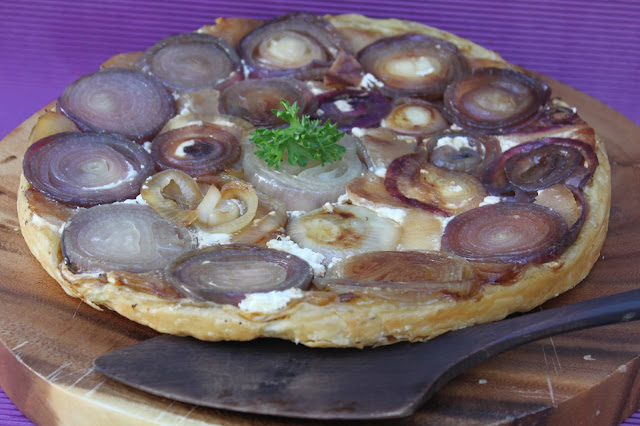 Preparation:
1. Sift flour onto a working surface. Add salt and butter. Coat the butter with flower. Using fingers smash butter with flower until you get pieces similar to cornflakes, with as much flour as possible incorporated in the butter.
2. Sprinkle cold water on top of the mixture and start to make a ball scraping the dough using a scraper or a wide blade knife. Make a ball by scraping, pressing and folding the dough until almost a smooth ball forms. It can still have some visible pieces of butter in it.
3. Finally, roll out the dough between 2 sheets of plastic foil to an inch thick layer, fold in three and put in a refrigerator for 30 minutes.
4. Remove the dough from the refrigerator. Roll it out again with a rolling pin to an inch thick disk and fold in three again. Repeat two times. When the dough is folded for the third time wrap it in a plastic foil and chill for 20 minutes in a refrigerator.
5. To prepare the filling, heat 2 tbsp of olive oil in a frying pan. Add onion slices and fry until slightly brown. You can try to preserve the whole slices for a nice presentation, or just mix them. 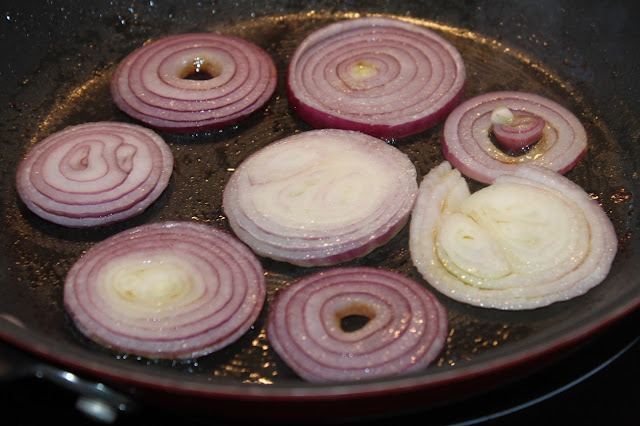 6. Transfer the fried onion from the frying pan to the bottom of the baking form coated with oil. On the same frying pan heat one tbsp of olive oil and fry apples until soft. Spread them on top of the onion. Season with salt and pepper and finish with thyme. 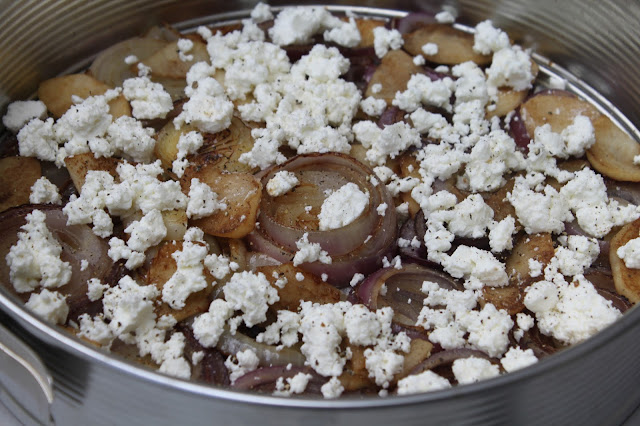 7. Preheat oven to 375F.
8. Roll out the dough to a 10-inch circle. Transfer it on a rolling pen to the baking form so it covers the onion. 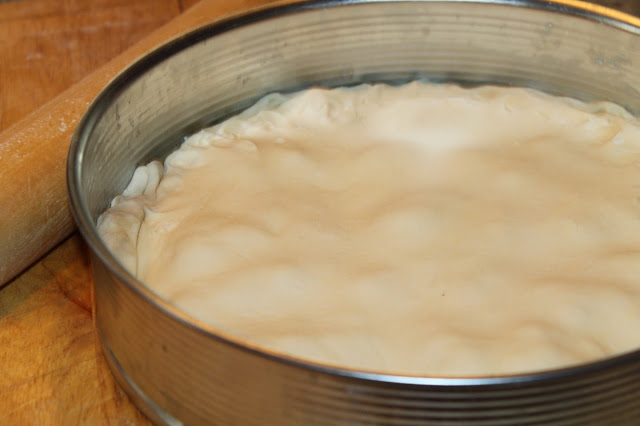 9. Pierce the dough a few times with a fork and bake for about 40 minutes until the top is dark gold.
9. Cool the tart slightly, cover with large serving plate and flip over on the plate. Cut and serve. 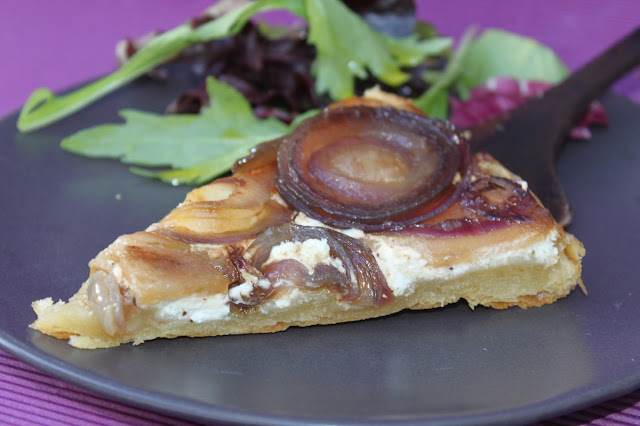 Posted by Pots and Frills at 9:56 PM No comments: 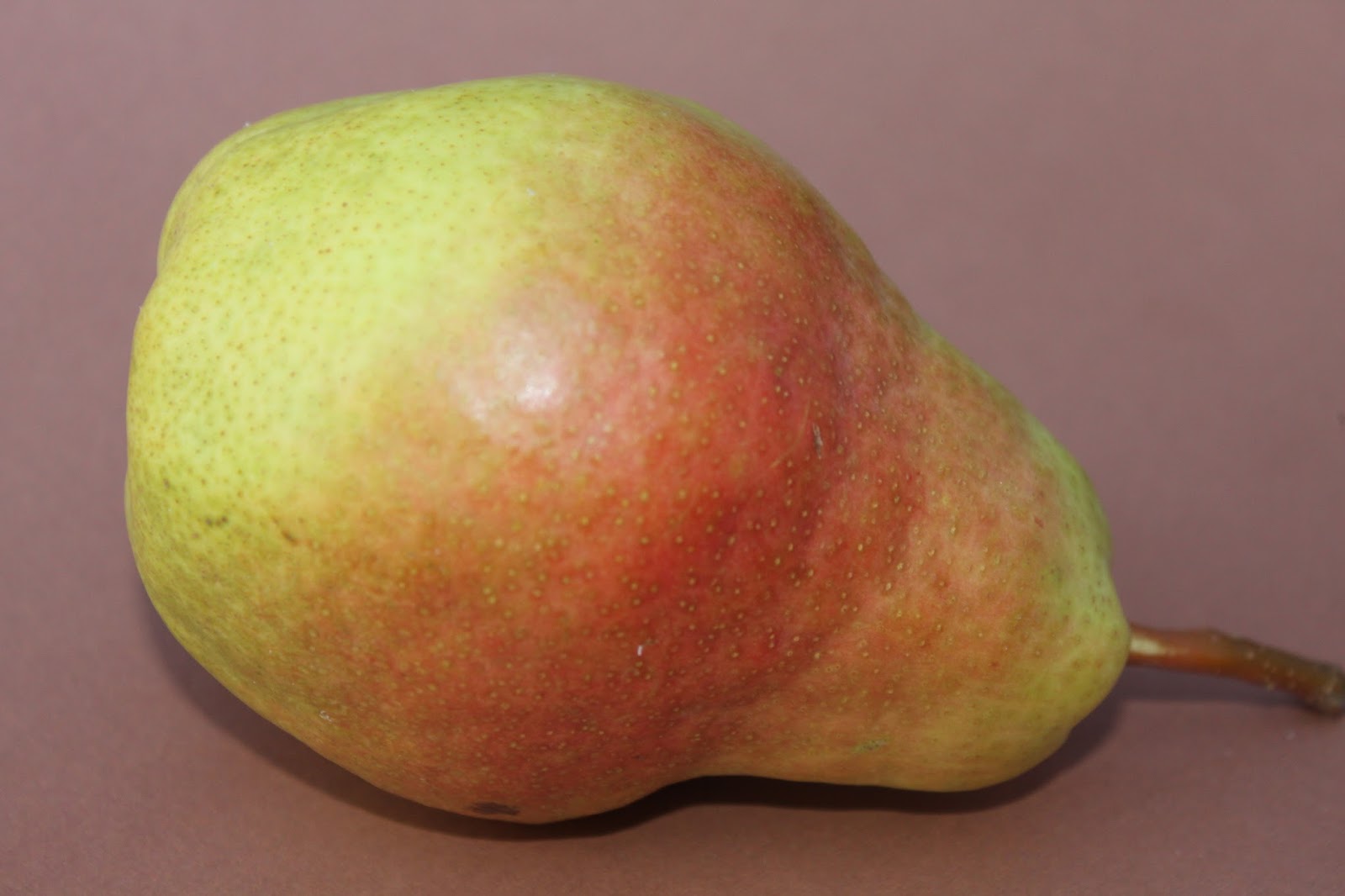 The base of this cake is made from egg whites only and it was one of the reasons I got interested in this recipe, because I was wondering what to do with the leftover egg whites that I had in my refrigerator

Besides that purely technical aspect, I thought the recipe was worth trying because the cake turned out delicious. It was very light and moist.The base is baked with ground hazelnuts which adds a nice flavor. It is a layered cake and between its two layers there is a cheese and pears filling. Originally fresh ricotta is used for the filling, but if fresh ricotta is not available, it could be replaced with mascarpone. The moisture comes from the syrup that is obtained from cooking pears and is drizzled over the cake at the end. 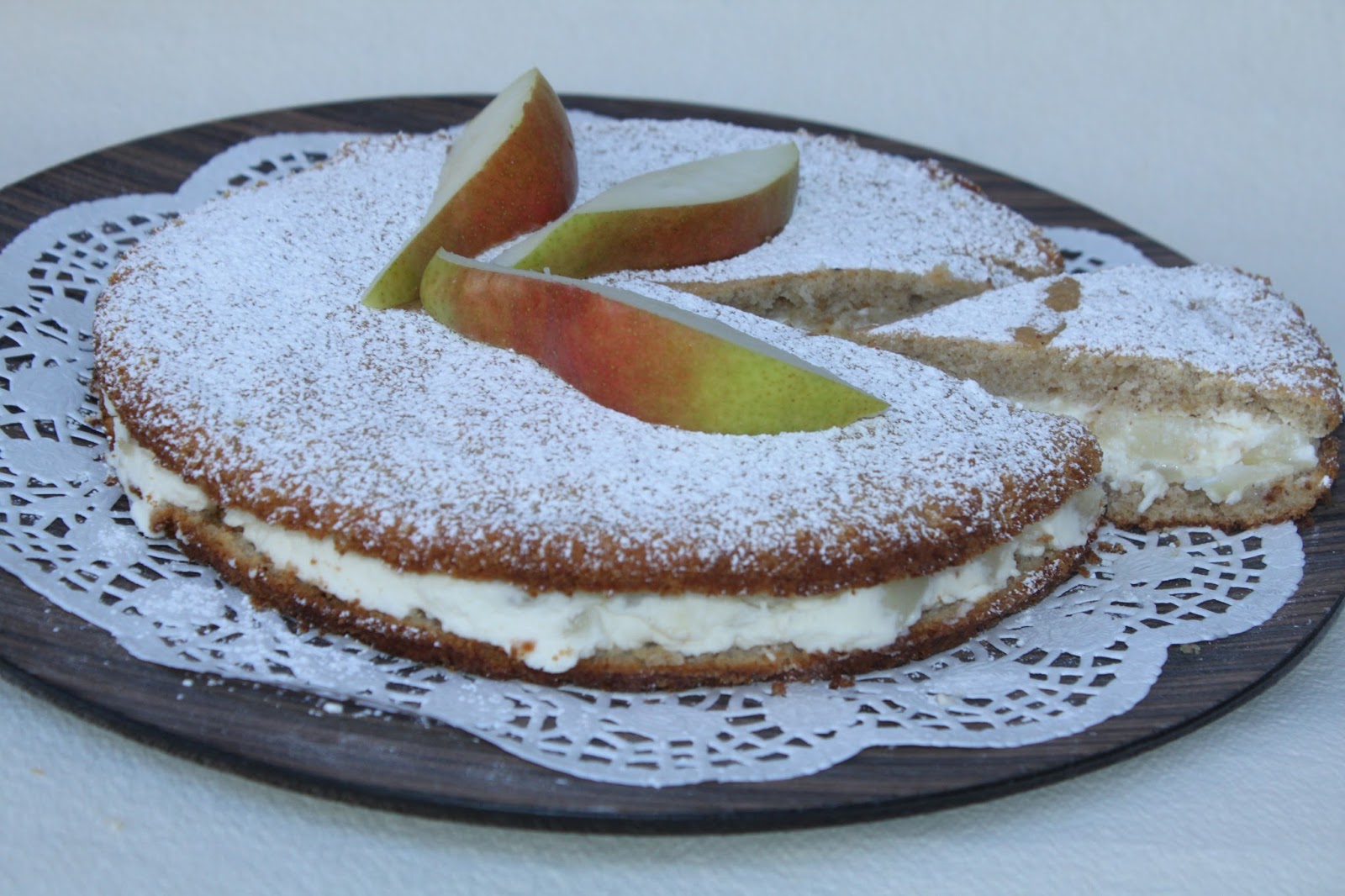 Preparation:
1. Preheat oven to 350F. 2. Place hazelnuts in a food processor and grind them into sand-like consistency.
3. Add flour, sugar and butter to the nuts and run the food processor until well blended.
4. In a separate large bowl whisk egg whites until stiff. Fold them into the nut mixture.
5. Grease with butter an 8-inch round baking form with a removable wall and line it with wax paper. Spread the nut mixture evenly and bake for about 20 minutes until firm. Let the cake cool down.
6. In a medium bowl mix water, rum and 1/2 cup sugar and bring it to boiling. Add cut pears pieces and simmer them until soft. Drain the pears and let them cool.
7. In a medium bowl whisk ricotta, 2 tbsp sugar and whipping cream until fluffy. Add pears and mix gently.
8. Place the cake base on a serving plate. Cut in half and spread the cheese filling over the bottom layer. 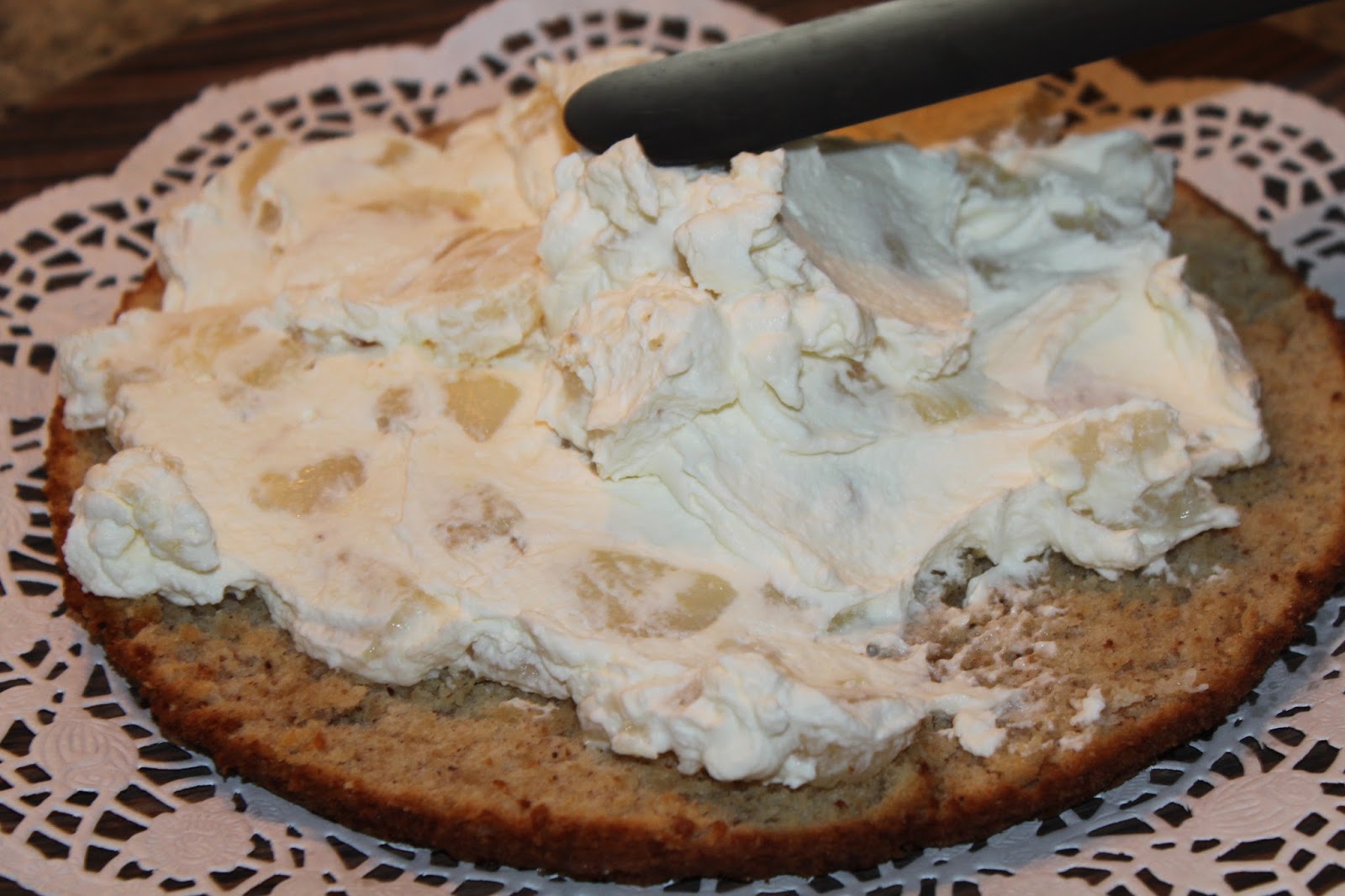 9. Cover it with the second layer, press gently so the filling spreads between the layers. Drizzle the top of the cake with the rum syrup, dust with icing sugar and serve. 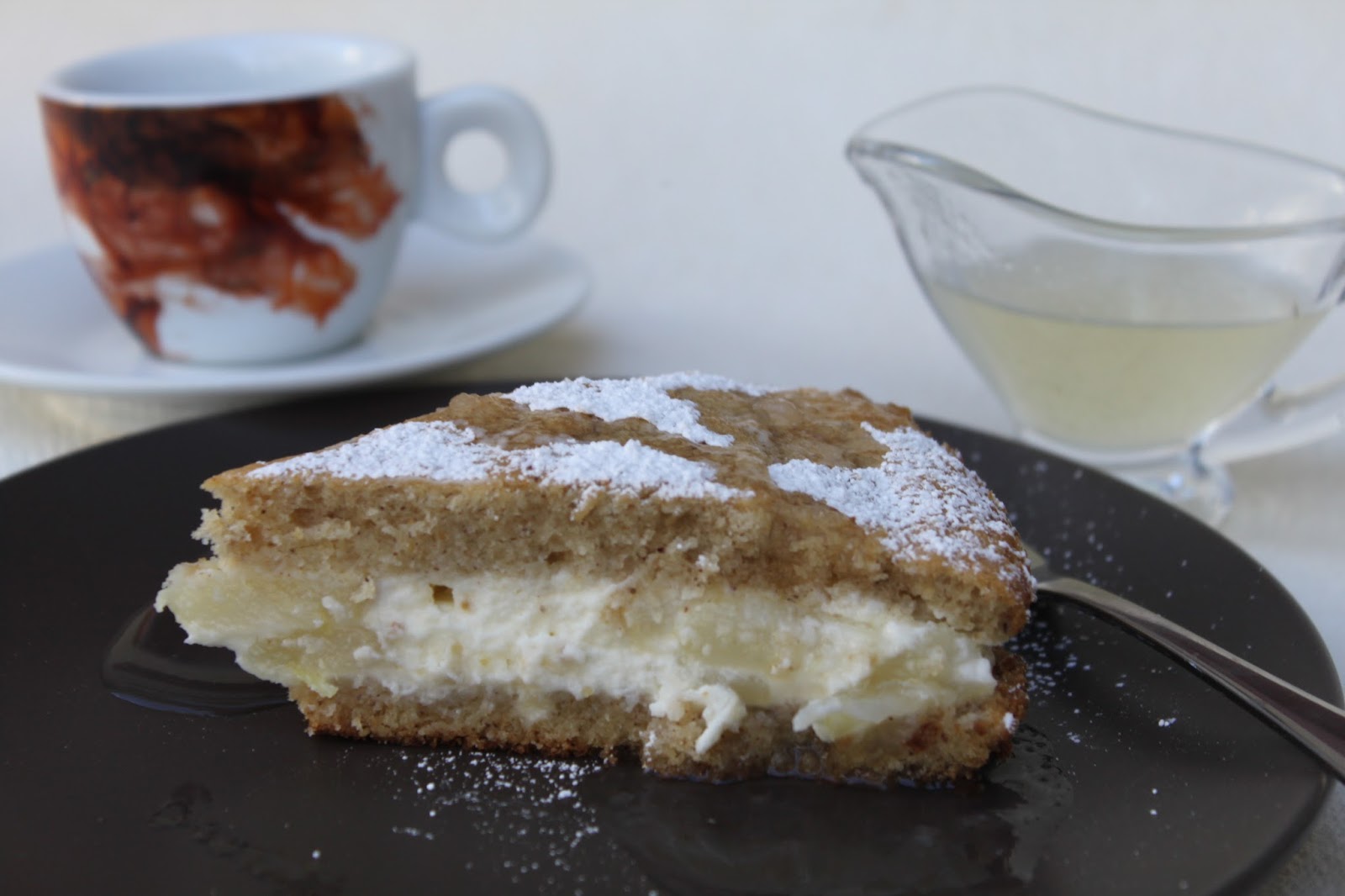 Posted by Pots and Frills at 7:10 PM No comments:

Pots and Frills
Welcome to Pots and Frills. I was inspired to start this blog by friends, who are often asking for my recipes. To every "How do you make it?" I will now be able to answer "Go to my blog and find out". I will be giving away my own cookbook as I will be writing it, including my tips, my secrets, and my best ideas that work not only for the advanced cooks but also for those who need help in the culinary world. I hope you'll find my dishes simple to make but sophisticated in taste, original, and alluring in presentation. Some of these recipes are my own inventions but, more often, I have just added my personal twist to something already familiar. These recipes come from all over the world: my native country Poland, other European countries I used to live in, and from the US where I have been living since 1996. I hope you find these recipes worth trying. I believe they will make your life easier but, at the same time, more exciting and tasty. I also hope you will enjoy the short stories attached to some of my recipes and I encourage you to participate from time to time in my culinary journey on this blog and share your impressions. Bogna